Enter the dark and enchanted world of

In this world, we are plunged into a Victorian-esque dreamscape where otherworldly beings magically spring to life. An amalgamation, these creatures may be reminiscent of what we see in the real world, yet are spun entirely from Cegavske’s unparalleled imagination. You might find them frolicking in sunlit fields or lurking behind spindly, web laden trees; either way, you will find yourself drawn into their intense, dream like allegory.

Christiane Cegavske is an award winning stop-motion animation artist best known for her feature length film Blood Tea and Red String. Recognized internationally for her distinctive talent, the film has seen 47 official screenings in numerous countries across the globe and has received excellent reviews from The New York Times, The New York Post, Variety and others. She was recently awarded the Guggenheim Fellowship for Creative Arts in support of her current intriguing creations in progress. Among her other outlets of creativity include puppet and doll making, painting, drawing, costume making, and poetry. She is a creator extraordinaire, to be sure. 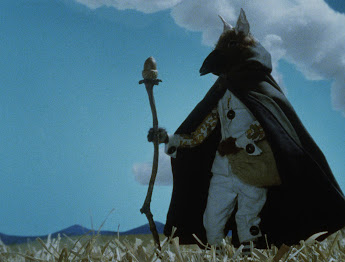 Everything in her films, from the puppets and the costumes they wear, to the miniature sets in which they are brought to life, is handmade. Cegavske often works in isolation for hours on end in her home studio in Oregon. In the spirit of the old masters of stop-motion (Jan Svankmeyer comes to mind), her worlds are created with painstaking detail and include the use of natural objects, such as animal bones and seed pods, as well as household materials like cellophane and cotton balls, to create life mimicking effects.

One thing that strikes me most about Cegavske’s work is that it is heavily steeped in symbolism. Select objects such as seeds, eggs and gemstones represent spiritual sentiments that are in turn reflected by the demeanor of the characters. The dichotomy of compassion and societal corruption is experienced through the feverish, winding plot in Blood Tea and Red String. Here we encounter flute playing forest creatures that look like a cross between rodent, bird and human, which represent innocence, play, and trust in their fellow forest neighbors. The softness of their nature is contrasted by a clan of regally dressed, blood tea drinking mice who attempt to steal the thing that is most dear to them: a hand sewn marionette doll who births a flying bird girl. This bird girl was conceived from an egg after it was planted and sewn, with red string, into the hollow fabric belly of the lifeless marionette. Overall the tale is heartrending, hypnotic; I would even say psychedelic. 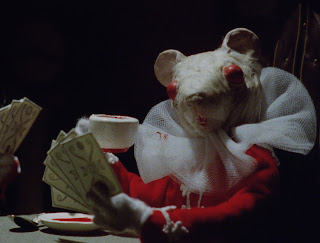 After seeing her film for the first time 11 years ago, I was compelled to check out what other seductive creations Cegavske had made. I was thrilled to discover her 2D works, which can be interpreted as an extension of the 3D realms seen in her films. These images are also rich with symbolism and even contain biographical elements, according to Cegavske. In this work we often witness dolls, whose stitched placid smiles only partially disguise an internal mourning. We find them embraced by menacing skeletons, ravished by crows, or wandering aimlessly in a never ending sea of sand. 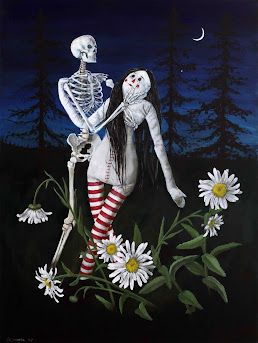 Death and the Doll

In 2018 it was an immense honor to curate a show at the Art Queen Gallery in Joshua Tree, CA, titled Fever Dream, which featured Cegavske’s multi-faceted work. The show included a series of paintings and drawings to be viewed as a type of daily diary, several haunting life size marionette dolls, and a life size paper boat which lay center stage. Upon the opening reception night, she graced the audience with a presentation of a previous short as well as snippets from her current work in progress, Seed in the Sand.

Her upcoming film Seed in the Sand will also be a stop-motion animation feature and is sure to be another deeply enchanting tale and perhaps even more refined, given the newer technologies available for animation artists today. The film’s production is in collaboration with talented music and voice artists Karie Jacobson and Drew Kowalski, with specific scenes driven by unique compositions. Sneak peeks of this work reveal characters such as a shimmering sea monster and furry red beaked critters immersed in complicated ritual and synchronized dance. 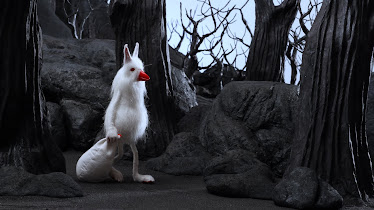 Still from Seed in the Sand

While we all (impatiently!) await the completion of Seed in the Sand, hop on over to sites such as Amazon or Vimeo to either re-watch -or behold for the first time- her previous masterpiece Blood Tea and Red String. And by all means, don’t stop there: peruse her website for a complete taste of her creative offerings which will include other short films, paintings, prints, dolls, puppets, books, fabric designs and more. If you are interested in supporting Cegavske’s current project, become a patron on her Patreon site, offering various membership levels and perks.