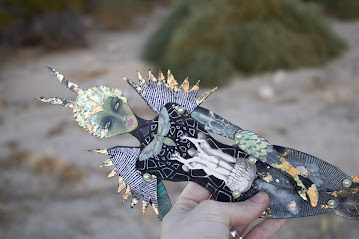 Protozoa limbs affixed by pearl joints, golden antlers framing a sea-green face. The eyes have opened, and the body radiates history: Frankenstein at its finest.

Dissecting, rearranging, amalgamating -the results are intricate beings made from what would otherwise be forgotten scraps. Paper is the primary medium, in which heaps of vintage articles and photographs become the genesis of Joshua tree artist L.I. Henley’s stunning contemporary collage work.

With an esteemed background in literature and poetry, Henley has naturally always had an affinity for words and paper. Recognizing that the written word could be manipulated into viewable works of art, she allowed her fascinations to lead her deep into the visual realm. She began cutting up paper. And adding to it. She experimented with collage techniques such as poetry erasure, blacking-out, scraping, layering mixed media, and even custom paper making. These experiments with paper eventually evolved into a cohesive series of movable, stark female figures known as her Weirdling, Dreamling, and Deer Goddess paper dolls.

She begins with the face, hand painted on thick quality paper, followed by outlines of the limbs and torso. Once these are cut out, she gets to building up the bones and meat with layers of micro details. These details are painstakingly cut from old photographs of flora, fauna, insects, and anatomical references (to name a few), and applied ever so delicately.  Once the body parts are intact, she adds her final magic marks - dashes of shimmering gold leaf, tints of smooth oil pastel- to create the distinctive personality of the doll.

We may call them “dolls”, yet they do not seem like toys to be messed with. As with the Deer Goddess series, their penetrating eyes are fierce, warning the onlooker to gaze but not touch. It seems they are warriors guarding more than just their feminine territory, but also their fragility – they are made of paper, after all. With these peaceful army dolls, Henley aims to “capture the paradox of fierceness and vulnerability”.

Her Weirdling and Dreamling series inspire a more dream-like atmosphere, as if naïve to the perils of the material world. With their eyes closed they float blissfully through a timeless abyss.

To further bring these beings to life, Henley has recently embraced stop motion to create a moving collage in the seven minute short film “Break”, which includes a soundtrack by sound artist Jonathan Maule. The film opens with a dancing Deer Goddess, who attracts a flurry of flying insects that begin to mimic her movements. Caught in the frenzy of the dance, the goddess’ limbs chaotically detach and then reassemble (much like Henley's creation process), allowing a graceful entrance for the insects to fly within and become one with her, as if to impart the peaceful message that there is no separation between us and nature.

“Break” is just one other medium which Henley has utilized to expand her ever growing paper empire; being the experimental, multi-disciplinary artist that she is, we can expect to be met with many more surprises awaiting us at the tip of her scissors and sumptuous stacks.

Follow Henley’s vision and stay tuned for her feature show at Art Queen Gallery this December, which will include dolls of larger scale, original collage, quality limited edition prints and more.